The Cuban Crisis and the Cycle of Survival

a través de The Cuban Crisis and the Cycle of Survival

The Castro dictatorship is trying to hold on to its Venezuela quasi-colony. Venezuelan society is about 80% of the way towards total collapse, but the cubans are trying a dual approach: they are preparing an armed militia for urban warfare, while allowing the colombian narcoguerrillas (ELN and FARC) to control large portions of territory south of the central cordillera (the venezuelan llanos and portions of the Amazon jungle).

The cubans realize armed irregulars which lack popular support are doomed to failure. So they are also scheming a false government change, which would have Maduro replaced by a different puppet backed by boligarchs and «opposition leaders» they have created and financed, like Manuel Rosales, an old corrupt populist from Zulia who opposed Chavez, was jailed, and now serves as a cardboard prop after being released.

The question in my mind is whether Brazil, Colombia, Ecuador are willing to see a Cuban satrap emerge on their borders in exchange for the end of the flood of refugees, which is now approaching four million. And of course whether Trump handles this with care.

Right now Pedro Sanchez is in Havana, stayed there in spite of the ongoing Brexit crisis he created, and I suspect he’s getting guidance from Havana. Sanchez governs with the support of the Podemos communists who are closely tied to Maduro and therefore to the Castro mafia. So the Europeans may be about to get blackmailed into accepting the «alternate Cuban puppet ruling Venezuela» option.

Private Versus State, Novelties and Fossils

a través de Private Versus State, Novelties and Fossils

Bolsonaro and the Shadow of Lula 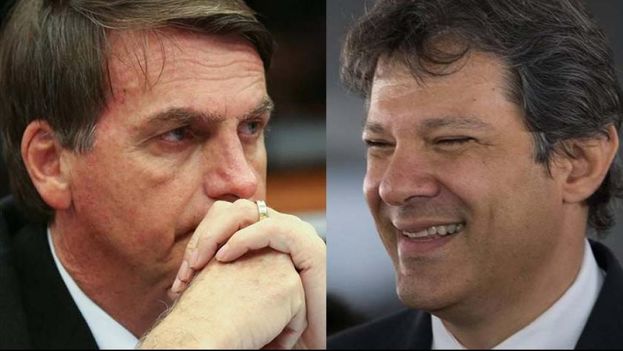 In the second round this Sunday, Haddad (right) could pay for the corruption linked to Lula, who has been his mentor, to the benefit of the extremist Bolsonaro (left).

14ymedio, Yoani Sanchez, Generation Y, Havana, 26 October 2018 — If everything goes as the polls predict, on October 28 the far right Jair Bolsonaro could win in the second round of the Brazilian presidential elections.

This possible victory would be underpinned not only by the weariness of a large part of the population in the face of corruption and the inefficiency of the political class, but also by the dead weight that his closeness with Luiz InácioLulada Silva has represented for the candidate Fernando Haddad.

While Bolsonaro fulminates against everyone, crusades against whomever and, like a chameleon, has toned down his speech to some degree in recent weeks, Fernando Haddad is linked to a fidelity with Lula which…

A Discreet Test of Internet for Mobile Phones Unleashes Frustrations

A young man connected to the wifi network in Havana. (EFE)

14ymedio, Generation Y, Yoani Sanchez, Havana, 15 August 2018 — A young woman was talking on the phone in a café when someone at the next table overheard the conversation. In a few minutes everyone in the place had their eyes glued to their cellphones to test the mobile internet they’d heard about in that private dialogue. The Telecommunications Company of Cuba (Etecsa) did not say a word, but at 11 am on Tuesday morning thousands of customers across the country knew that it was the moment they had been waiting for, for years.

Neither the official website of Etecsa, the state communications monopoly, nor its public communication office revealed that tests were being undertaken of the web connection; it was only uncovered by independent journalism sites and private accounts on the social networks. Thus, after two decades of delay and…

The debate: my presentation

a través de The debate: my presentation